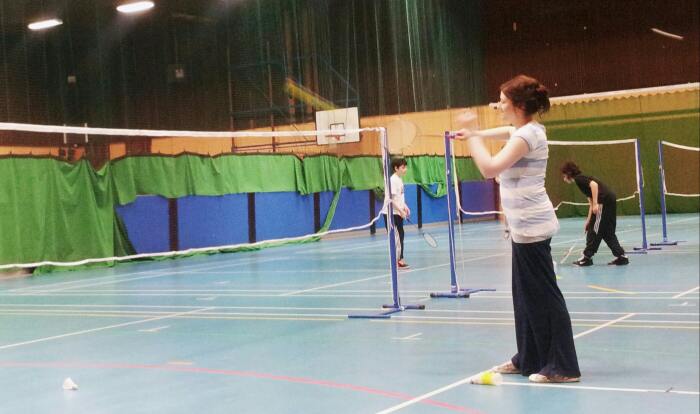 Badminton: the first thing I realised on taking to the court for my first lesson was that people actually play this sport. And not just people – some people. Shuttlecocks didn’t roll like tumbleweeds across dust-covered gym halls, the corridors didn’t echo with wails from the tormented ghosts of ruined racquet traders. A bit of an amateur over-dramatisation perhaps, but it would not be a lie to say that badminton was never before on my radar and, until I started this little challenge, I hadn’t really considered that anyone outside of school or retirement played regularly. Wrong again.

My lesson took place among the eight – yes, eight – badminton courts of Cumbernauld’s Tryst Sport Centre. And before my hour’s instruction was through, most of the playing surfaces were occupied by the incoming badminton club, with people tapping their watches on the sidelines for my poorly-used spot in the arena. I was reliably informed that the club had previously been busier still but, as the kids began what looked like army warm-up drills, it seemed that enthusiasm wasn’t waning for what I had initially thought was a very niche sport. And, by the end of my lesson, I had started to understand why.

My badminton coach (and chief motivator), Michael, kindly gave me the choice from the outset – would I prefer to learn the rules and court layout or just start trying to hit stuff? There’s only really one answer to that. After five minutes of trying hard to hit stuff, however, I started to wonder if I’d made the right choice. But we persevered – well, Michael persevered and I just followed suit – and soon the racquet was grazing those conical missiles almost enough to merit the word ‘hitting’. I even managed to find my target once or twice.

The coaching was well-paced for my complete-beginner status but varied enough to keep me interested and motivated to continue. Within a very quick hour I learned how to grip the racquet, apply proper serving techniques, and where best to position myself when the shuttlecock was wafting through the air towards my head. I even managed a couple of half-decent rallies, enough to make me feel like I was genuinely taking part in the sport.

I don’t think I’ll ever set the badminton world on fire but I’ve already acquired a racquet and some shuttlecocks and have taken to practising across the coffee table of an evening
so something must have stuck. It helped hugely that my teacher had the patience of Simon Templar and made it look so easy that I started to believe it was. He was even willing to suffer the strain of another lesson next week, and I’m hoping to impress him with my meagre progress.