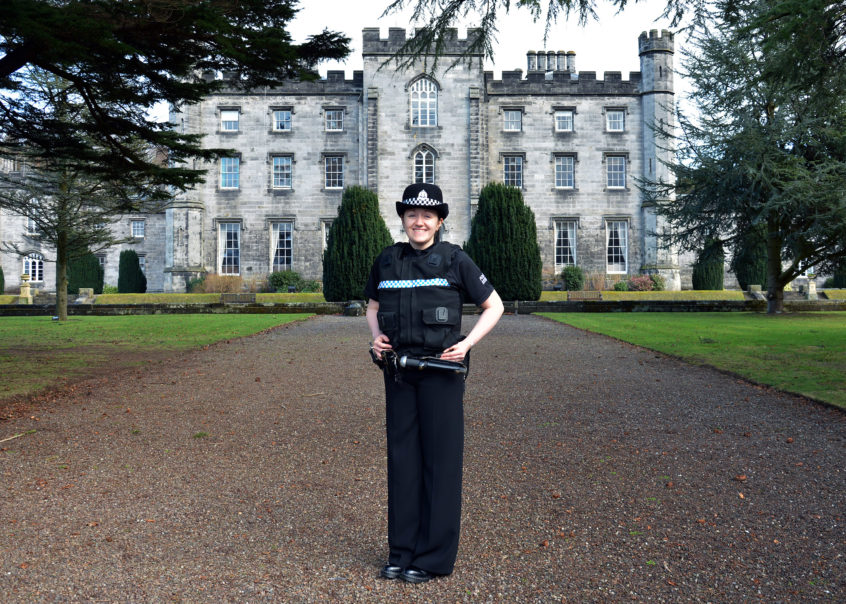 Like you, I know right from wrong. I’m not saying I’m always on the brightest side of that open doorway but I do what I can. The combination of permanent size four goodie two shoes and a conscience of which even the whistliest of crickets would be proud was more than enough to instil in me the genuine desire to behave from an early age. I’ve had my moments, fine, I’ve had my days, but even at my worst, I try to be a decent person, a human being in the truest of senses. It’s all we can do, right?

As an adult, I thought I knew everything there was to know about staying in the right. The day I arrived in the grounds of Tulliallan Castle at the Police Training College, I knew I’d been wrong.

Have you ever had that feeling that you’re about to step into something much bigger than yourself? Walking from my car to the front door of the college was that, plus a whole lot of scary. I’d been given lots of great suggestions on how to dress, what to leave firmly at home, even the best way to pin up my hair for the trials ahead, but I still didn’t feel quite prepared for what I was walking into. And that, in part, was by design. It would be better, everyone thought, if I approached the training centre in the same footfall as all other new recruits. In short, clueless and terrified.

I was met by Constable Wetton, one of the college’s instructors: an experienced and enthusiastic officer who spends her days passing on her knowledge to the next batch of uniforms, and her nights studying to further that very knowledge. The first thing that struck me was, well, that nothing struck me. Constable Wetton was a normal person, with a normal attitude, no stick up her rear about this idiotic civilian wandering around her place of work, disrupting important sessions with my silly antics. She was, and I use this word in the purest of senses, nice. And, let’s face it, spending two days chaperoning me through every lesson and lunch, and far too many loo breaks, should be enough to break down anyone’s natural courtesy.

I won’t deny that I’m easily impressed. I once saw a squirrel steal a fruit shop pear and spoke about it for a week. But the college didn’t even have to try. Between a well-stocked library and photography studio, lies a swimming pool, gym and museum, not to mention a coffee shop and private bar, and, of course, a full suite of classrooms, lecture theatres and an accommodation block for those students and staff choosing to stay on campus. It’s a self-contained village to the untrained eye, with its own bus stop and post-box, used only for training purposes rather than transport or love letters, it seems.

Over my two days of training, one thing that never failed to charm me was the hallway interactions. While walking from class to class, or even just across the cafeteria floor, every single soul around acknowledged me. ‘Good morning, ma’am,’ I heard it in my sleep thereafter, said so many times since it was. Apparently, student officers are taught to meet everyone with such a greeting, in order to prepare them to communicate with the world outside, once their time at the college has come to an end. For me, it was just a lovely little distraction, making each trip to the other end of the corridor a pleasant one.

So I’m in uniform, in the shadow of a stunning old castle, and one of the first lessons I’m introduced to is SPELS.

SPELS, however, didn’t see me trying to master Wingardium Leviosa while a posh kid looked on in disgust, since it is, in fact, Scottish Police Emergency Life Support – the cop version of First Aid. And while I didn’t conjure my own patronus, I did get to shout ‘it’s the police’ in a dummy’s silicone ear-holes and that, in itself, is an experience. The range of subjects I both participated in and witnessed during my time with Police Scotland was remarkable. So I’ll take some time to remark upon it. Vehicle searches in the car parks, officer safety training, child protection, firearms, court preparation, potions… okay, the latter is perjurious but my gist is gettable. I tried everything from learning the phonetic alphabet to role-playing as a drunk driver, and even then only scratched a bottomless surface.

The instruction is exhaustive – and exhausting. By the end of each of my visits, my concentration was wavering and I was in desperate need of a sugar boost. No wonder the on-site Starbucks is always mobbed. The twelve week police training course is not for the fainthearted then. The days are long and full, with studying, homework and personal fitness to keep up at night. But – and this is something I neither expected nor quite believed – no-one grumbled. The enthusiasm level among all those I spoke to was unfaltering, even after a particularly windy drill session when chasing hats across the courtyard became the focus of energies (and, I’ll admit, my amusement).

And that’s when it struck me: the rigorous application process is just that – rigorous. By the time a recruit passes that final stage and is rewarded with their acceptance into the training programme, they’ve had time to think, to reconsider, time to evaluate whether or not the hoop-jumping and backwards-bending is worth it – and decided it was. At Week Eight of their tuition, they weren’t tired or at tether’s end as I imagine I would be, instead buoyed by their successes and ready to do what it takes to cross that speed-trapped finish line. I’m sure they have days in which the uniform feels heavier, their heads barely holding up the hat but, surrounded by others in the self same dinghy, the extra effort is at least one shared.

No, I didn’t come away from Tulliallan ready to sign up as a police officer, although I had become quite attached to the hairnets and handcuffs. I’m not dedicated or energetic enough to survive Day One. But I did leave my time with Police Scotland with some fresh ideas on things that I reckoned I had sussed long ago.

Right and wrong, well, they’re fluid. They depend entirely on whose measure, what rule book, which yardstick you use. You’re neither one side or the other at any given moment; you’re somewhere in the middle, trying to keep both feet on your preferred side of a line that’s constantly shifting. And each of those fledgling police officers with whom I spent a little time are heading out into their careers with the unenviable task of keeping track of which direction the moral compass is pointing day to day. And whatever you think of the law or its guardians, you can’t deny that’s a difficult position in which to work.

For regular people, keeping on the right side of the law is a bit of a judgement call. A speeding ticket short of a bad day. For police officers, recognising the wrong side could mean the difference between ending a dangerous situation and ending it all. Pointing North isn’t quite as straightforward in those circumstances.

My time with Police Scotland not only taught me how to disarm a perp or resuscitate a rubber citizen, but also gave me a greater understanding of ordinary people, trying to do a job that at once is both life-threatening and life-saving.

And maybe that’s the real difference between right and wrong – the people that stand in the middle.

If you’re interested in becoming a police officer in Scotland, you can find all the information you need on the application process from the Police Scotland recruitment page.

3 Comments on “Never miss a beat”