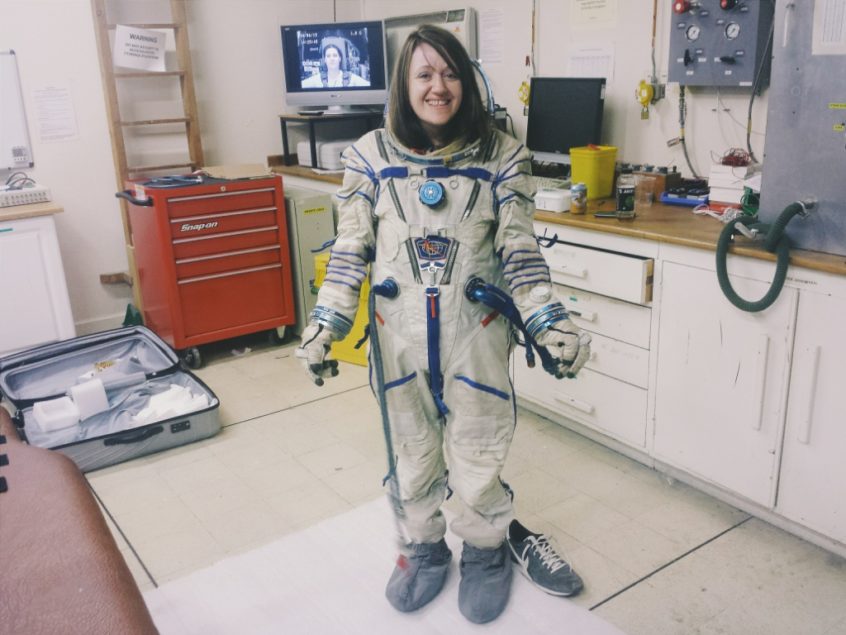 Gravity. For as long as I can remember I’ve been its victim. From that day in my childhood when it guided boiling water from a cup down my chest to my more recent sporting escapades foiled by the cruel hand of Newton’s baby. And all the embarrassing tumbles in between. We’ve battled on land; we’ve battled in skies. We’ve even battled on the rungs of a particularly ill-maintained ladder. And not once have I tasted victory. I haven’t even caught a waft of it. Gravity is just that good.

QinetiQ in Farnborough hosts one of only a handful of long-arm centrifuge machines in the world. The whole world. And, as part of the Mission X Train Like an Astronaut programme, I’d been invited to test my poor body’s reaction to high G forces on a machine on which both fighter pilots and astronauts had suffered before me. There’s no refusing that offer. Well, no refusing it with pride intact.

Nestled discreetly – and slightly bizarrely – in the midst of a new housing scheme, the centrifuge’s home is an industrial beauty. Outside, unassuming, neither babe nor barnacle; inside, quirky spaces, complex equipment and a crazy-cool circular room with a viewing gallery, a control station and the most remarkable piece of kit my peeps have ever set sights on.

With the other lucky trainees – six pupils from a primary school and their brave science teachers – I tried desperately to take in the scale of the operation on first glance. The machinery itself covers an entire diameter of the floor, in-spin only narrowly missing the curving walls around. On the end of the scaffolding body is the passenger capsule, romantically called a ‘gondola’: a compact bubble of grey and glass, in which cables buzz and monitors flash, reminding the subject that they are very much still alive, when it doesn’t quite feel that way on the inside. The whole pivots around a central point, both geographically and symbolically, since at that point sits the experience’s most important person – Doctor Jeremy Radcliffe – the man charged with keeping bones and organs pulling in the right direction for the day.

Before we felt the machine’s muscle though, there were forms to sweat over and sticks to pee onto: no dignity left unturned to make sure we were fit for purpose. And the purpose? To withstand anything up to 4.4 G without losing control of our bodily functions and to describe those delightful physiological (and emotional) effects to the young people and our wonderful on-hand doctor via the camera system onboard. Easy… right? Hmm.

Boarding the gondola is a lot less graceful than it sounds. Think not calm waters and dainty boat shoes. Instead think ripped tights, awkward positions and a whole lot of bum in the air. But I guess the result is the same: an excited passenger, strapped securely into a fighter pilot’s seat, awaiting the sudden jolt of movement that will cause the blood to rush screaming from their head.

I’ve never been to Venice.

The rig takes a second to build momentum. Then a jolt, and the world is gone, replaced by a blur of unrecognisable shape and fading colour as you and it spin, muscles and mass drawing downwards, eyes fighting to keep focus when all around is lunacy. And then slowing again to a head-whirling halt, the feeling of continued movement confusing what was up with what was down, insides jostling for the space they once called home. A moment or two to regroup then the all important question: are you ready to go again?

Two runs in – the first at a solid 2.2 G, the second at 3.2 or thereabouts – and I was locked in a battle with gravity for control. Little tasks like touching my finger to my nose became ridiculously difficult as I struggled to comprehend the effects of the increased down-force on my limbs. By the third time around, on reaching 3.6 G, my vision started to grey around the edges, like a fog flanking me, creeping inwards. The instruction from Doctor Jeremy was simply to squeeze together my legs, pushing my feet into the panels beneath. The mist cleared almost instantly, as the blood was forced to stay the hell out of my legs and head back up where it belonged.

And then it was done. All over and back on solid concrete; reality returning as quickly as the blood flow to my extremities. But for those brief moments, I was an astronaut in waiting, feeling what they feel, seeing what they see. And it was wonderful.

I guess I could have left my training there… but not while there was a real spacesuit to be sported; one which had been used by actual astronauts during their own schooling. Three people (including TV presenter and spacesuit expert, Dallas Campbell) struggled for an obscenely long time to pour me into the contraption, although I didn’t feel quite so bad when told that real astronauts can take up to forty five minutes – with a whole team of helpers – to don their own suits.

It fit like a glove: a sticky, sweaty, heavy, restrictive glove. I lasted about five minutes in its confines, trying to do finicky tasks with hands that felt so constrained by perfectly engineered space-wear as to be worse than useless. Worse than usual, even.

So, I guess I’ll never beat gravity. I’m not sure I even want to. But since feeling its might to the extreme – witnessing what it can do, but doesn’t – my respect for its apple-dropping prowess has ironically soared.

Gravity may not like me. I’ll always grudge it my scars and calamities. But now I’m sure it’s definitely a force to be reckoned with.