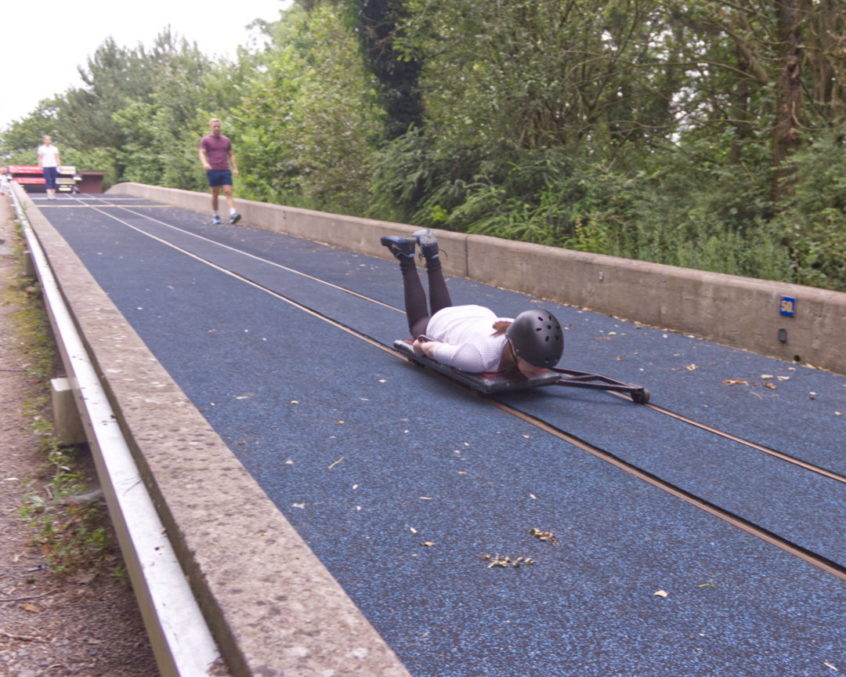 I’ve yet to figure out which I am.

Anyway, have I ever mentioned that I fall a lot? I have? Then gear up for something familiar.

I fall a lot. You would think that by now I would have developed better balance or at least a handily callused hind-end, but no, I continue to tumble through life leaving no inch of flesh unbruised. Signing up to plummet down a track on a tea-tray at 30 mph probably wasn’t my most self-aware plan then, but I figured that since falling was part of the exercise, this was one adventure that might come pretty naturally to me. 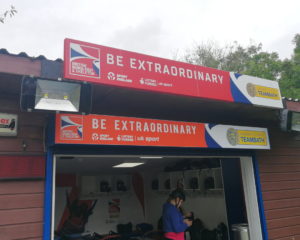 Based on the University of Bath campus, the BBSA is the representative body of bobsleigh and skeleton in the UK, who kindly allowed me to join one of their taster sessions run throughout the summer. With the UK’s only push-start track and a coaching staff of elite athletes, it’s no surprise that the programmes are much in demand, but I still found myself daunted by the small crowd of participants and spectators that lined the course. It’s a strange place to find yourself really, unless you’ve driven for eight hours just to be there.

Former British Skeleton and British Bobsleigh athlete, Donna Creighton, was to be our main teacher for the afternoon, and welcomed all of the participants, putting us at as much ease as was possible when faced with speeding head first down a concrete ramp. 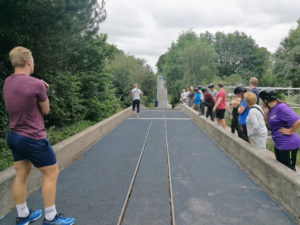 Waivers signed and helmets affixed, within ten minutes of arriving we were on the track being shown how best to position ourselves on the skeleton, when my stupid hand once again betrayed me by jumping into the air at the first request for volunteers. In fairness to my stupid hand, I do prefer to lead the charge in any new activity, if given the option. In the context of my anxiety, it’s much better for me not to delay an upcoming stress, instead cutting off my fears with direct action as quickly as possible. It has worked for me countless times in the past so I can’t really blame my stupid hand for overriding the recurring thought that perhaps, just this once, I should let someone with a little more ability show me the ropes – or at least tell me where the ropes are.

Fortunately, the first skeleton run for any newcomer is exactly the kind of pursuit at which I excel – idle, prone, and completely unintentional. Face down, arms flat, gripping onto the board’s handles as though your face skin depends on it, and before you know it, you’re being pushed by the feet until gravity speeds you towards the track end. Utterly exhilarating, and only slightly nauseating when the momentum runs out and you plunge backwards towards the start line once more. 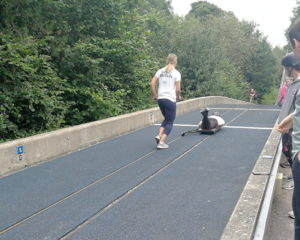 Yes, I thought, rejoining the back of the queue, I can do this all day. Although I did feel a little guilty that the coaches were having to run around, propelling each of us in turn down the slope, while I had barely moved. I needn’t have worried.

As I neared the front of the line once more, I suddenly realised that in volunteering for the easy run I’d secured my place as test subject for each subsequent attempt, which Donna was just about to explain would require progressively more physical input. I laughed as one of the athletes demonstrated how to go from running alongside to lying on top of the skeleton, without so much as a eyelid bat. Honestly, it was like watching a magic trick to which everyone else but you has been shown the secret. Except that I had been shown the secret too – repeatedly, patiently, and in extreme slow motion – so what happened when I stepped up to re-enact it was no-one’s fault but my own.

A little jog, pulling the skeleton alongside, so far so uneventful. Then that dreaded transition from standing to lying turned all those detailed instructions into a jumble of unintelligible synonyms until, all of an instant, I could feel myself slipping… Without any input from my brain, my arm – well-practised as it is in falling – automatically reached out to save me: right in front of the moving skeleton, which barrelled over my waiting wrist. When my chin hit the track, to the gasps of the onlookers, I knew it was that time again; you know, that time when I have to reassure everyone that I’m absolutely fine, apologise for disrupting the event, and trundle off to First Aid for an ice pack, missing the rest of the fun. 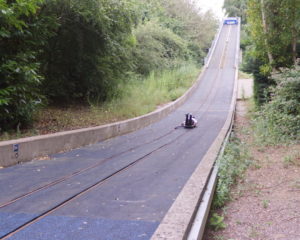 And so I did, as I always do, but not before ignoring the prospect of further social shame and giving it another old college try – or, in my case, old nursery try. I’m not sure if the pain in my swelling wrist was enough to distract me from my innate clumsiness or if I was just due a helpful fluke, but my second attempt was as close to perfect as I was ever going to come, so not very close at all really. But still the board and I both made it to the other end of the 140m run without further injuring either skeleton, and that’s close enough to a win for me to hum the national anthem.

Oh, did I mention that I fall a lot?