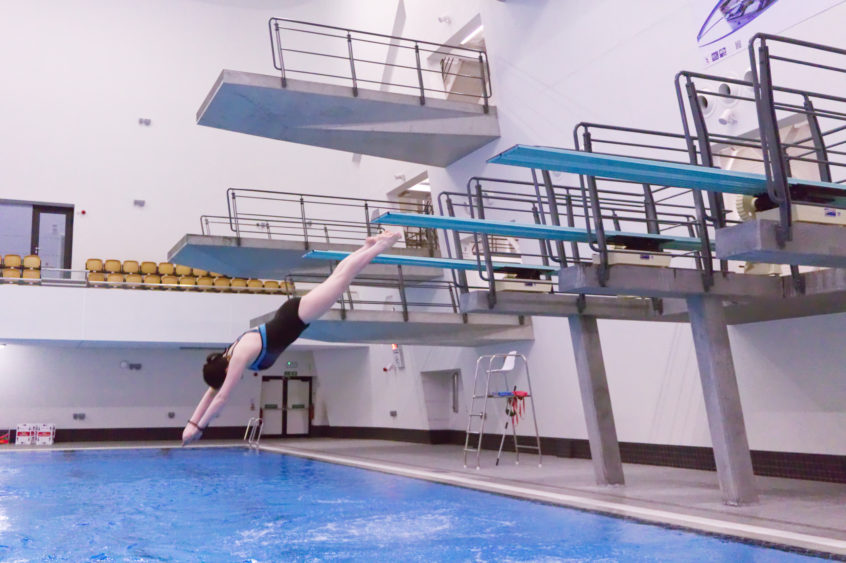 Dive in. Take the plunge. Jump in at the deep end. The metaphors are endless; well, at least end-few. And they pretty much all relate to facing something scary. So quite why this recovering aquaphobe didn’t expect her first attempt at springboard diving to be utterly terrifying is frankly unfathomable – or un-1.83-able, if you’re metric.

Okay, I did have a few wobbles on my way up to Aberdeen Sports Village, where my lesson was scheduled for 8.30pm on a Wednesday evening, but what goes on underneath my swimming costume is my own business. And besides, the roads up there are particularly shoogly. But once I was standing by the side of the impressive 25m diving pool, resplendent in my one-piece, poised in the elegant stance of a diving champion, I was completely ready to just leap in. 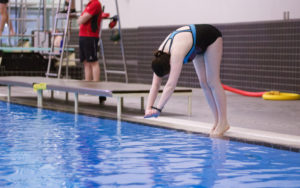 That’s a lie. I’m only pointing that out because I’m not sure it comes across in this font. It’s all about the facial expression, I guess, so I’ll just reiterate: it’s a lie.

I’ve been scared of water since before I knew what being scared was; since I scalded myself with boiling water when I was a toddler. I don’t remember the accident, or the aftermath, but I still have the scar and the resulting hang-ups. Thinking about it now, I reckon my scar – which runs almost the entire length and breadth of my torso – was a catalyst for plenty of my anxieties and inhibitions. Not participating in P.E. because of the communal changing rooms, avoiding sleepovers and shopping trips, wearing oversized clothing and staying indoors on sunny days – you don’t need me to point out the connections. My scar determined how I felt about myself, and all the hospital trips and burns clinic visits cemented those feelings in my young psyche.

These days, I’m cool with my scar; ironic, given its origin story. I don’t even mind that it stops me from being able to wear a bikini; at least it’s making the beach a safer place for others. That underlying fear of water that it stirred in me over three decades ago though has been a difficult one to shake. Five years of swimming lessons, phobia therapy sessions, and many panic attacks in a flooded quarry later, and I’m finally in a place where I can find calm in the water; but still I couldn’t bear loitering at the deep end of a pool. Swim through a deep end – fine. Accidentally find myself in a deep end then swim quickly to the shallow end – no problem. Throw myself into a deep end then stay there, purposefully – why would you suggest such a thing? The trouble is that I never learned to stop; to just pause in the water, without anything to cling to or drag down with me. I was adamant that I couldn’t tread water. In fact, it was the first thing I told the diving coach, Judy Wardlaw, and my fellow students, Rebecca and Beth (both lovely staff members at Aberdeen Sports Village who kindly joined me for a lesson).

I can’t tread water, I said.
Nice to meet you, they said, since they’re better at conversation than I.

Barely five minutes into the session and Rebecca and Beth had already begun to take Judy’s expert direction: jumping into the 5m deep water from the poolside, then moving on to the tables and eventually the 0.5m and 1m springboards, practising increasingly difficult techniques. I watched from that same spot at the edge of the pool where we had all started, as they tried out the different diving shapes that Judy had demonstrated at the outset. And still I hadn’t managed to move my quivering legs an inch closer to the water.

But then I just jumped. It might have looked more like a step or a fall to a passer-by, but in my head it was a gazelle-like soar into the waiting depths. I won’t pretend I knew much about the next few seconds of plunging into the water and floundering back to the surface; I’m not much of an actor. But however it happened and however incompetent it looked, back to the surface I came, with a smile that concealed the amount of chlorine still swishing about my mouth. That one tiny hop had changed everything. 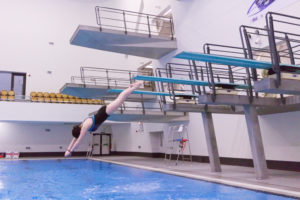 Turns out, I can tread water. I can sit quite comfortably and calmly in the middle of a 16 feet deep pool. I had just never allowed myself to try. It’s a lesson that I learn over and over, like some sort of eternal goldfish, throughout all of my adventures: there’s no way to succeed without first giving yourself the opportunity to try.

I’ll never be an Olympic diver; those trunks just don’t suit my aesthetic. But over the rest of that hour-long session, I became more at ease with myself and the water than I ever imagined possible. Not quite Tom Daley, but verging on Tom Quarterly at least. From that first jump in from the poolside, to forward rolling into the water and spinning to a stop somewhere before hitting the bottom, to forward diving off the 1m springboards, while the world bounced and bowed beneath my feet. All the while, Judy supported my progress from the sidelines, congratulating me on my tiny victories and pointing me ever in the direction of improvement; always offering me the chance to try more – and try higher.

Maybe if the aquatics centre was around the corner from my home, I would have been tempted to leave the 3m springboard for ‘another day’, but I had driven for 3 hours for the lesson and had the same journey back to do straight afterwards. Fear, it seems, does not trump laziness. 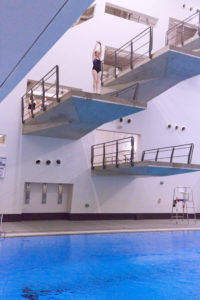 I climbed the stairs and tottered out to the end of the plank, focusing on what I had learned, rather than the prowess of the small child, spinning and somersaulting from the 1m boards opposite. Judy called encouragement from below. Nothing else for it but to jump once more. So I did.

The 3 metres passed in a windswept flash – gravity doesn’t give you much choice on that one – and soon I was back in the drink, with a pride that confusingly came after a fall. As is the way with such things, my legs were almost instantly carrying me towards the steps once more and up, and along, and SPLASH. The 5m platform was next, then the 7.5m; at least those were solid, without the unnerving bobbing of the springboards with which to contend.

Beth and Rebecca both joined me in quite literally raising our game, and we each successfully entered the pool from above once more – although, the others with slightly more style than this buffoon. My proprioception is all over the place; or it would be if I could tell where I had put it. I just can’t seem to figure out where one end of my body is in relation to the other so by the time you add in 7.5m of plummeting, I’m in no fit shape for graceful execution. 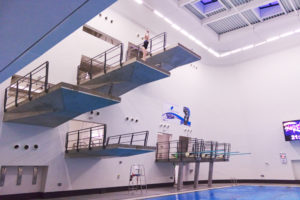 I almost got away with it too – with only a few minor mishaps and one quickly covered up boob-escape early in the lesson – but I should know by now that there’s no scot-free for this Glaswegian. That second 7.5m dive, fuelled by adrenaline and forgetfulness, saw me ignoring everything I had learned about holding my position, and hitting the water in what was probably a well-executed yoga pose. Resurfacing, full of woe and bash, I saw the look on Judy’s face and knew she could feel my pain – or at least see it. My legs were scarlet, with the sensation of sunburn minus all that lovely Vitamin D. By the time I arrived home, my thighs were almost twice the size and already bruising a fine purple marl. But none of this had stopped me from clambering back up to the 3m board for one final dive, on Judy’s astute recommendation, to end the lesson on a win.

Like my scar, those bruises are a physical manifestation of my clumsiness but, while they’re only temporary, they reminded me of a much more permanent blot on my character: my attitude. I smiled when I saw the bruises bloom, called them ‘badges of honour’ and enjoyed every wince they elicited. But the bruises didn’t provide that constructive interpretation – that’s all on me. I decided all that time ago, albeit subconsciously, to label my scar as a problem, a flaw. Now, in turn, I’ve decided to let that go. I’m quite certain the change won’t happen overnight and I’ll be swimming against my own tide for a while at least but, if it stops me from berating myself for a 36 year-old accident, then I’m willing to throw myself in headfirst once more.