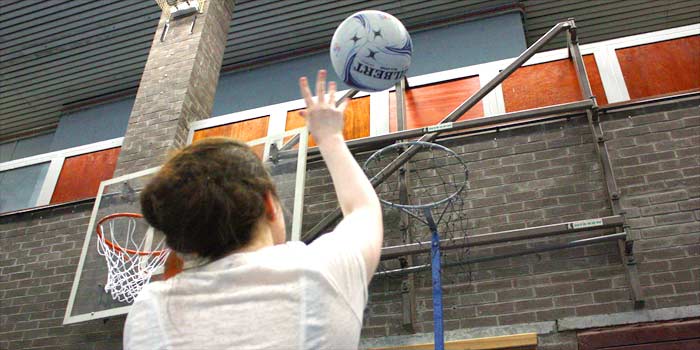 Teamwork: it’s one of those irritating buzzwords you hear just about everywhere you go. Job interviews, personality tests, random courses. If you’re anything like me, you’ve lied about teamwork skills at all of them. Don’t get me wrong, I love people and don’t even mind being around them at times but, as a self-proclaimed indoorsman, I’ve never really been in the situation in which life or, worse, losing depended entirely on my ability to work well with others.

I’ve read enough about team-work and pack mentality to know that there are alpha and beta players, initiators and appeasers. But I’m definitely not a follower, and I’ve never really had anyone to lead, so I’m not quite sure where I fit. In the context of sport, I’d be the lame wolf in the corner, wearing the omega bib and a ***GENUINE INVISIBILITY CLOAK – SPARKLY*** bought in desperation from eBay. And that’s roughly the mindset with which I toddled along to my first team sport: netball.

Happily enough, I was invited along to my alma mater, Strathclyde University, to try netting some balls (right?) with their team. Unhappily enough, training took place in the main gym hall, into which I’d only ventured throughout my four years of study for the odd exam. That same panicked feeling flashed back in a clammy-handed cloud, only this time I had no rickety desk and virgin booklet to retreat to, and instead of spilling my mind into ink, onto parchment, I would probably be spilling my blood onto cold plastic flooring. What’s the opposite of excited? Yeah, that.

Thankfully, the team’s coach, Karen, knew of my distinct inability to sport and had the situation covered. She took me through some of the basic techniques as we joined in drills with the others; ‘the others’ being the fittest, liveliest and leggiest bunch of students I’d ever really seen. They jogged, passed and gathered; I made some clumsy attempt at all three. And after all these years of telling myself (and being told by anyone close enough to witness) that I can’t throw or catch, it turns out I was wrong! I can do it; I’m just completely rubbish at it.

Afterwards, we moved onto shooting practice and Karen set up the beginner net for me. By beginner, I mean for small children. There are Lilliputians with arthritic knees who would have hit the target more often than I did. But perseverance is a wonderful thing and as the odds lengthened so too did my vertical reach, and I eventually found a nice rhythm of one goal to four throws from different spots in the shooting circle. The ever-vocal ‘they’ say that when the ball leaves your hand you know instantly if it’s on target. I guess ‘they’ have better hand-eye coordination than I do though, since only when the ball dropped feebly behind me could I tell definitively whether or not I had scored. I spent an enjoyable, if tiring, ten minutes chasing the ball around my corner of the court as it hit the wall and trundled off or dropped gracefully through the net… and trundled off.

But then the session moved on to group drills and it became immediately clear that I was Titanic-ally out of my depth. All we were asked to do was pass the ball among our team a certain number of times without the opposing side taking control of the spherical treasure. Easy. We arranged ourselves around our small section of court and the women quickly began calling each other’s names, passing forward and deftly plucking the ball from the air just as it looked certain they would never reach it in time. And I froze. It was like the last scenes of Hoth in there.

I’d learned that I could throw and catch, I’d been told the rules like everyone else, I’d even been assigned to a team to save the embarrassment of the selection process. So why on earth wasn’t I shouting, passing, running like the rest of them? Because I didn’t have the slightest clue how to get in amongst the action.

Faced with so much uncertainty, I reverted to type and shuffled off to the sidelines to watch the group having fun in my absence. I was through the looking glass and, with no bank of experience to call on, this little Alice just couldn’t muster the confidence to step into the game.

Maybe I’m being slightly unfair to myself, since the session I joined was the final training night of the year, and these women had been operating as a team for at least one season, getting to know and, I trust, like each other’s skills and characters. They could not have been more welcoming and I at no point felt as though they saw me as an outsider. But I certainly did, and that was enough to strip away any micro-layer of confidence I’d developed from achievements in the previous solo sports. Coming into such a gelled team, even just for one training exercise, was like trying to infiltrate a blancmange with a feather – I just didn’t have the right cutlery.

Where does that leave me and netball then? In a bitter divorce battle for custody of my self-esteem, you might think. But no, I really enjoyed my time with the Strathclyde squad and have a new appreciation for the sport. So much so that I joined the Active East team to watch the opening match of the World Youth Netball Championships in the Emirates Arena a few months later. And loved it!

You might even say that I learned more about my problems with sport from that short time avoiding netball than I have through any of the other sports so far. Give me individual sport tasks and I will try and, almost certainly, fail to my heart’s – and your amusement’s – content. But put me in a situation among others with greater experience and plenty more skill, and watch me slink into the shadows never to see the fluorescent light of a gym hall again. It’s probably quite telling, but I’m sure I won’t be told.

I didn’t, and probably won’t ever, have the joy of wearing one of those excellent dress-and-bib combos in my netball experience, but I did gain good insight into my teamwork abilities and might now be able to work myself up one or two characters in that all-important Greek alphabet.

I am a team player, honest. I’ve just never found a team in which I could play.

Please note: this post was written by a self-employed person who hopes never to have to attend another job interview in her working life. If, however, she does, this post will disappear faster than an ostrich from a cannon.