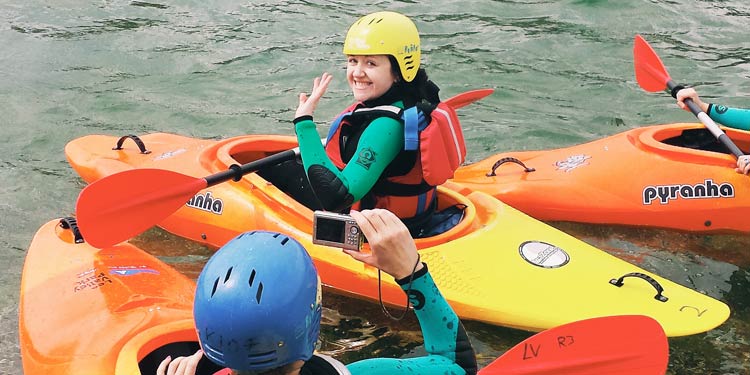 Life, I reckon, is just a steady stream of events, happening whether or not we’re around to describe them. Our characters, yours and mine, are just our actions and reactions to these events, good, bad or utterly indifferent. And that’s why I truly believe that people are fluid; personalities setting and resetting from day to different day.

How many times have you heard, ‘that’s just the kind of person I am’ or ‘oh, you know what I’m like’? Well, you know what, I don’t know what you’re like. Most days I don’t even know what I’m like. And that’s the thing: our person may be set in naturally-nurtured stone, but our characters, who we choose to be, those are moveable beasts, pinned down only fleetingly by the paths we pick on any given day.

I’m risk averse, jumpy, introverted – whether by instruction or design, that’s my life’s lot. But me, my character, the person I choose to be on this particular day? That’s up for grabs. How I act in situations I can affect or react to those I can’t: that’s who I am. So yes, Paula is a veritable home-body, who baulks at the mere sight of water, and struggles among strangers. But recently I chose to travel to London to try out some water sports with a bunch of other bloggers whose names I didn’t yet know. Like I said, fluid.

The white water blogger day was beautifully organised by spogo – an Olympic legacy project set up to encourage greater sporting participation by collating activity and club information into one easy-to-use website – who ensured that not only were we safe and cheerful but also adequately photographed in our moments of greatest discomfort. Nine bloggers, two activities and one Olympic venue: a dozen ways the day could unfold.

The scene of our efforts was the wonderful Lee Valley White Water Centre, a course constructed specifically for the London Olympics and now used by the city’s water-sporters for canoeing and rafting and, by us, for splashing and general merriment. I was instantly put at ease by the rest of the group (Jen, Mollie, Sophie, Lucy, Cathy, Sonia and Tess) who were a lovely mix of fellow non-swimmers – for terrified camaraderie – confident water-goers – for a sense of security – and one medical professional – for potential life-saving. Sorted.

The wetsuits were unforgiving and the safety briefings typically terrifying but, before I knew much about anything, I was trussed up in a life jacket, knee-deep in a yellow plastic boat, and wearing a (slightly ominous) number 13 helmet. It was all good until the instructor booted – okay, gently nudged – my blissfully-grounded kayak into the lake along with the rest, and expected me to, would you credit it, move. As it happens though, muddling along on a picturesque pond was almost peaceful, if a little dizzying, as endless circles seemed to be my direction of choice. Not so peaceful though, were the ensuing games of Tig and Heads, Shoulders, Knees and Toes, designed to ‘build our water confidence’ or, I suspect, give the instructor a damn good laugh. The brave among us then clambered across the front of our wobbling crafts, while the less so tried desperately to resist the urge to cover our eyes and let go of the boats to our sides, which might have meant an early bath for the girls doing the climbing.

By the time we scrabbled back onto the open-armed banks, we were wet and a bit cold but, joy-of-joys, still around. There were no accidents, no rescues, no 999 calls. And even when a few of the less water-resistant participants had a go at rolling the kayaks to fall more-or-less gracefully into the lake, nary an oxygen mask was required. Victory was ours and, thankfully, so was tea.

The ‘break’ brought excited chatter, lengthy toilet trips (wetsuits are not quick-pee friendly), and one of Spogo’s 1 Percent More challenges – the dreaded wall squat – which Mollie utterly tore apart. The incredible fitness of these proper sport bloggers at times amazed me and at other, particularly weary, times flummoxed me. What I was doing in their midst I’ll never know, although at a guess, I would say mostly flailing.

Rafting was to be our next pleasure, specifically white water rafting, and the advice, from the suitably stern instructor was beyond scary. What my crazed mind took from the lengthy briefing was that it would only be luck if I managed not to drown and that luck didn’t hang around those parts so much.

And suddenly, we were out on the lake again. For twenty minutes, we ducked and huddled, leaning to the direction of the coach’s calls and generally rocking the boat as far as possible without inadvertently tipping the boat over. All, of course, to teach us the movement of the raft, the techniques of staying within its confines, and the importance of listening to our skipper, whose job it was to guide us safely, if somewhat strictly, around the upcoming rapids.

Fun and games were had, but then came… The Swim Test. To secure a place in the Bobbing Bronco, it was apparently essential to throw oneself off the perfectly safe bank into the abyss beyond, armed only with a life-vest and the promise of a tow rope hurled from the side if the going got too tough.

Okay, it wasn’t quite as dramatic as all that, but for someone whose swimming abilities match her spools of old holiday photos – dusty and undeveloped – watching as my co-rafters jumped out of the craft and into the cold lake beneath was worrying at best, and suddenly all I could hear was the opening bars of ‘The End’: Morrison’s vocals soothing and portentous in equal measures. I quickly realised that this was, indeed, the end of my rafting journey and, as soon as the boat touched ground, I scrambled to shore, waving goodbye – and good luck – to my beautiful friends.

I watched from the sidelines – not my preferred vantage point these days – as the rest of the group laughed and splashed their way around the white water course and their captain yelled his crazed commands. And, I have to admit, I was more than a little disappointed in myself for bailing while the water was still blue. But aquaphobia is a merciless beast and, sometimes, fighting its battle just isn’t as important as surviving to face another swimming lesson. So I jumped into the nearest golf cart and made my way back to the comfort of the showers, happy at least that I’d kayaked and rafted to the best of my tiny abilities.

Two years ago, when my knocking knees worked as decent divining rods, I wasn’t the type of person who grabbed a paddle and leapt into a lake. I know that, because I didn’t. And today, I’m not an astronaut or a cattle herder; I didn’t plummet through the atmosphere or wrangle the Billy Goats Gruff. But tomorrow, well, who knows? We’re just not there yet.

What you do, how you act, on one particular day can define you, right there, but then the calendar flips over, and suddenly you have your life to write all over again.

People are amazing, fluctuating organisms that can only be pinned down to predictability if they allow themselves to be. Today, I won’t be pinned down, but tomorrow, hey, that Paula’s not come around to decide yet.

For information on how you can try kayaking or rafting, or find a stern instructor to scare the life from your vest, visit spogo’s Sports Directory – or join the Army.