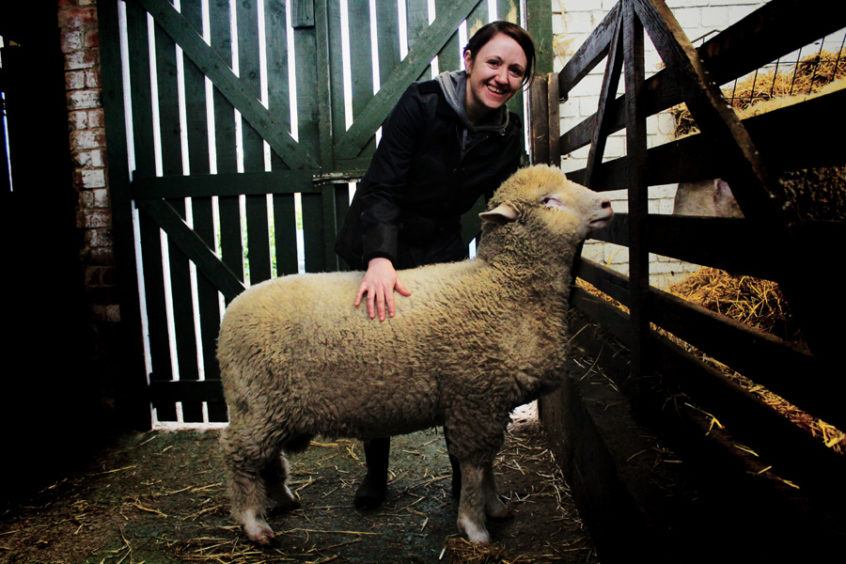 Old MacDonald, apparently, had a farm.

And on that farm was the entirety of my childhood knowledge of agriculture. E-I-E-I-O. Those cows and sheep with their moo-moos and baa-baas, here, there and every bloody where, were pretty much all I ever really knew about the work of farmers, or where the food I so keenly chowed down on actually originated.

Farming is traditionally thought of as a family vocation; young MacDonald no doubt following his father onto the ancestral land. And my family are, were and probably ever will be bona fide city slickers. But when has genetic predisposition – or lack thereof – ever stopped me giving something a go? And with so many young people still wanting to work in fields of gold, it really was up to me to show them how it’s done… or not done.

The first thing you need to know about Gorgie City Farm is that, while it’s in the middle of Scotland’s capital and has some fine small animals that you and your little one can have a wee cuddle with, it’s not a petting zoo. For the most part, it’s a proper, working farm. That means the animals are there at the farmers’ discretion – and for a reason. So while you can wander around the pig pens, cooing over their cute little piggy tails, you can follow your stroll with a tasty sausage in the café made from their own fair flesh.

This principle is at the heart of the farm’s culture. Their animals have a good life, a healthy and well-cared for life, munching on fruit and veg donated by the local Sainsbury’s no less. But once it’s time, it’s time, and off they pop to prop up the food chain in the way that farm animals always have done.

And as I was feeding sheep and shovelling shtuff, toddlers on a regular morning visit were roaming the grounds, learning that important lesson of food production and value. Whether those youngsters go on to be meat-eaters or vegetarians, they were given the information to fuel their decision in that former waste depot site in the heart of Edinburgh. And, one way or another, that’s pretty special.

The other thing you need to know about Gorgie City Farm is that, in spite of looking, smelling and, at times, tasting like a place of animals, it is predominantly, and proudly, a people charity. I spent my day on the farm feeding chickens, mucking out sties and weighing piglets, yes, weighing piglets, with an incredible group of folk whose one overriding similarity was that Gorgie Farm had changed their very direction. From the staff, whose backgrounds ranged from military to social work, to the volunteers, all with their own reasons for offering their free labour; each of them at one point in the day spoke of the impact that this industrious piece of land, and what it stands for, had made on them.

While helping me – and, by that, I mean doing it single-handedly while I tried not to throw up – clear out a particularly well-used pig pen, one young volunteer explained to me what the farm meant to him. Basically, it meant a future. It was difficult to imagine, as he so enthusiastically raked sodden hay and chased stubborn swine, that so bad had been his behaviour only a few years before that he had been ushered firmly out of school and into a placement instead in the farm’s volunteer programme. In his own words, he was heading for jail, bored and in a bad crowd. Now, he is most definitely engaged, his crowd are fellow competitors at the sheep-showing events at which he thrives, and he’s heading for a well-deserved place at agricultural college. Impressive, right?

I’m sentimental, this much we know, a decent hat-tumbling brings tears to my eyes, but to hear this young person’s tale of transformation, and all with just an outlet that suited his skills and interests, a little responsibility, and a generous dollop of manure, well, you can imagine my emotional state. His turnaround says a lot about the farm and his own character, but more still about the importance of connecting with young people with their abilities in mind, and ensuring that those who don’t thrive on the academic route, have the same opportunity to learn the subjects that suit them, in the way that inspires them most.

You can probably tell that I loved my day of farming. The wellies were cold, the work tiring, and the lambs far too skittish for a proper cuddle, but something about being outdoors, working on real tangible tasks – whether or not they made me heave – really breathed air into my soul, not to mention my ever centrally-heated lungs. Gorgie City Farm not only gave me an insight into the practical chores of farming, but also to the educational and social aspects, and that’s something I just didn’t expect.

I’m not sure MacDonald’s age is relevant to the welfare of the animals or if he perhaps wanted it known that he came to the profession late in life, but now I think I understand why the farmer stuck to the trade until his dotage.

Farming might not be for everyone but, for some, it’s everything. And what more could you ask of your working life.