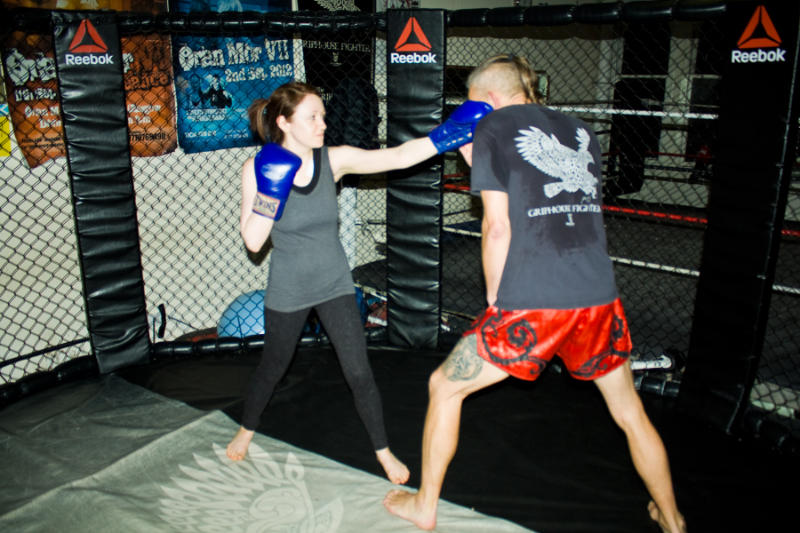 What kind of person are you? It’s not quite the easiest of questions, I’ll admit. I mean, can you really boil your entire character, like a pot of your granny’s condensed soup, down to a simmering pan of underwhelming adjectives? Of course not. You’re no half-shrivelled parsnip – honey-roasted or nay – and I’m pretty sure your intimates aren’t in any way a-leekie. And yet, the more life changes of late, the more often I find myself pondering what exactly I am. I guess it’s better than losing myself in it though.

Ask me the same question just a few years ago and, after quizzing you on the intricacies of time travel, I would have answered in one shamefully reductive word: nervous. Not kind, nor thoughtful, nor even plain: all this Jane knew of herself was anxiety. And, crazily, I clung to that naming word like a hostage to Stockholm. Fine, it treated me like a three-day scab but at least it was ever around. Nowadays, without fear at my foundations, I’m on shoogly ground. I’m sure I don’t defy description but I certainly resist it.

Of course, it’s often easier to define a thing by its negative, right? For example, I can say with complete certainty that I am not the type of person who enjoys hitting stuff with an abandon that could only be described as completely without reck. Well, until this week, that is.

The Griphouse, in Glasgow’s Maryhill area is a haven of strength; if, in order to reach that haven, you’re willing to negotiate a menacing entranceway, a stairwell that ignores all modern laws of architecture, and a door that welcomes you like a Rottweiler on ‘roids. Once you get past those though, a haven, I tell you. Even co-owner, Guy Ramsay, admits that newcomers earn respect simply for reaching the gym floor, since the approach in itself is a test of spinal fortitude. But, trust me, like that dog-eared copy of The Lovely Bones, The Griphouse is not by its cover judge-able.

Well-known in the city for having both the best instructors and ethos, this MMA gym quickly makes an impression on the senses. Sure, the air is thick with the smell of exertion, and even this ectotherm found the temperature on the intrusive side, but it’s not the olfactory atmosphere that strikes hardest. Bustling with bare-foot boxers and wringing wrestlers, the gym’s main hall rang not with the expected sounds of glove on pain, instead with those of effort, yes, but also with joy.

Arriving for my first lesson on Tuesday evening, I found a varied set of seemingly ordinary people amassing for Guy’s intermediate Muay Thai session. With classes available at all levels across the entire gamut of Mixed Martial Arts disciplines, I’m sure I should have opted for something more in keeping with my upper body weakness. But what’s adventure without, you know, exhaustion? 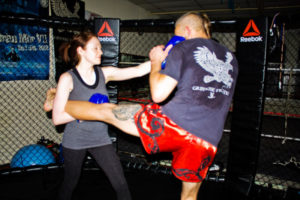 In the shadow of the octagon cage, Guy kicked the class off in literal fashion with a pad exercise, and around the now-bouncing floor, the mixed sex group threw fists and femurs like a confused shot-putter at their well-protected counterparts. Many of this twenty-strong class, and of the gym’s other cohorts, haven’t ever fought competitively and it’s neither essential nor expected that ever they will. In fact, while The Griphouse can boast the highest number of MMA fighters in the country – two of whom were grappling around the cage throughout my stay – the centre consistently attracts clientele who use the facilities for fitness and conditioning alone. And, after about three minutes of learning some basic Muay Thai punches, I understood exactly why it works.

Paired with a patient partner, Farah, whose skills were tested more, I expect, by my inane chatter than my paltry efforts, I graciously added my own vibe to the air quality as my glands and I worked our way through Guy’s instruction. Farah’s pad work showed that she had both a strong understanding of the fundamentals of Muay Thai and a very kind heart, as she shifted slowly between positions to allow this novice to settle gradually into her new habit. With a jab and a cross securely in my Spartan armoury, like ZZ Top, Guy introduced legs to the party, and I realised that kicking stuff without malice aforethought is as cathartic as a Greek bath.

Before I could gild the cage, which, as Guy explained, is designed for safety rather than savagery, I was encouraged to learn the best form of attack, with a few defensive moves. Booting a fellow human in the stomach to pitch them backwards might be your idea of fun but, well, actually it’s mine now also. There was padding, okay, don’t judge me.

Watching the choreography of floating and stinging around the room, in the seconds between my attempted bouts, was almost hypnotic at times, and the coach’s intermittent calls will permeate my night terrors more frequently than Coco the Impaler, although I’m sure it’ll come in handy to know that a head kick doesn’t require as much power as a body kick in my day-to-day. And while my time in that cage was shorter than the average bear, my experience of MMA taught me more than those eight walls could ever contain.

There’s no denying I’ll never be a fighter: I err towards loving and have known paper bags to hold out against my wrath. But even if I don’t know who I am, I at least now know exactly what I’m not. I’m not a slave to my nerves, I’m not a prisoner of fear, and I’m no longer caged by anxiety.

Originally published in The National.